From the moment our association of Spanish anthroposophic psychotherapists became members of IFAPA, the anagram of our federation caught my attention: cuboid crystals of pyrite.

So, I decided to do some research on this mineral in order to put it on our website:

Pyrite is a sulphide mineral with the chemical formula Fe S₂. It is composed of 53.48% sulphur and 46.52% iron. Often massive, fine granular, sometimes subfibrous radiate; reniform, globular, stalactitical. Insoluble in water, and magnetic on heating. May also contain traces of gold.

Pyrite is a mineral of the sulphide group. It is insoluble in water. It contains 53.4% sulphur and 46.4% iron. It occurs in carbonatites. Magmatic segregations in basic rocks with pyrrhotite and pentlandite in pegmatites and skarns; hydrothermal in porphyritic and vein deposits together with other sulphides; sedimentary and metamorphic hydrothermal. Magmatic segregations are known from Sudbury, Ontario (Canada) Merensky Reef, Transvaal (South Africa). Crystals up to 200 mm in diameter are found at Rio Marina, Elba (Italy) and good specimens of octahedrons at La llagua (Bolivia). Crystals up to 120 mm in diameter have been found at Bingham and Park City, Utah (USA). Crystals up to 150 mm are known from Huanzala and Quiruvilca, Peru. The largest pyrite deposit is at Rio Tinto, Spain, where fine-grained pyrite forms accumulations of up to approximately 1 billion tones. In Navajún, La Rioja, Spain, there are beautiful cubes of up to 80 mm. They are pyrite cubes of great size and perfect structure, but the most striking are the twins and their combinations. It is a deposit of lacustrine origin and therefore the genesis of these crystals is quite singular. It is interesting that Spain, according to a Rosicrucian map, is the head of Europe. The head is where, according to the alchemical “tria principia”, the saline principle lives, the metabolism represents the sulphur principle and the rhythmic-thoracic-pulmonary-cardiac system the mercurial-healing principle. 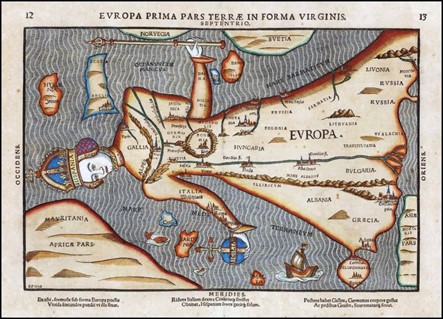 As we can see, there are many different forms of crystallization of this mineral depending on the area of the earth, although it is not found in all countries. Specifically, the sizes of the cubes can be very varied. They range from one millimeter in edge length to 20 centimeters, which is the largest found at Navajún. They can be individual pyrites or twins. Twins are specimens in which two or more pyrite cubes have crystallized.

The IFAPA anagram is therefore a twin, a cuboidal pyrite specimen in which several pyrite cubes of different sizes appear together. This type of crystallization is only found in the world at Navajún, in the Spanish Rioja region. Incidentally, there are many salt deposits in Spain, for example, rock salt deposits in different areas. The most important ones are in Catalonia, Cuenca, Burgos (Cabezón de la Sal). This last name means literally  “salty big head”(allusion to the head as salt pole of the body).

What does pyrite represent in the IFAPA anagram?

For me it represents an imagination: cuboid forces – head turned into mineral, specifically that of the forces of light “dying thoughts of the past” (light of thought)[1], represented by the mineral iron, harmoniously combining with the forces of darkness (will/goodness/love)” [2]rising part of the future”. represented by the sulphur principle, without supremacy of one over the other, but in balance of forces, transforming this union creatively into a superior unity, into a mineral, which at the same time serves as a remedy, because it has a mercurial-healing principle integrated in it.

Therefore, we see in this mineral – anagram of IFAPA – a harmonic representation of the three forces of the soul, the tri-principle: thinking, feeling, willing. Forces of light mercurially intertwined with forces of darkness.

Pyrite as a medicine in anthroposophic medicine

In Anthroposophic Medicine, in addition to the purely academic concept, the human being is taken into account as a being who, in his development over the course of eons, has developed in parallel with the world, as a child of the universe, as a microcosm, a contracted reflection of the macrocosm, whereby all mineral, plant and animal processes are closely related to their organic harmony and disharmony or, in other words, to their health/disease processes.

Whether in the form of iron disulphide or iron pyrite, this mineral is used to activate the metabolism by means of circulation and respiration.

Iron is a metal related to respiration: the blood pigment hemoglobin allows iron to bind to both O2 and CO2, bringing the former in and the latter out.

Iron is related to the earth’s magnetism. It therefore serves as a guide and compass for our orientation in terrestrial space. But also, within ourselves we need to integrate ourselves into the spatial forces and coordinates. Iron in the blood enables us to anchor our self in the vital bodily processes. Low iron levels make consciousness impossible. The human “I” gives us orientation in life; the iron in the blood mediates between the “I” and the spatial laws of the earth, making our earthly activities and work possible. Do we not say that a determined person has a will of iron?

Consciousness appears at the cost of a loss of vitality, caused by the presence of catabolic processes. The anabolic, overflowing, sulphur – character, which takes place in the darkness of the bowels of the metabolism, with its inevitable, necessary dull and muffled processes, is relentlessly defeated by the luminous power of the iron processes[3].

If we consider respiration in the broad sense as secretion and reabsorption, in catarrhal inflammations the respiration is altered: the secretion of fluid outwards increases, while the inflow inwards decreases. Pyrite brings the disturbed respiratory process back into balance. Sulphur activates metabolism, protein biosynthesis and activates elimination processes[4]. With its yellow color and intense odour, this mineral passes directly from the solid to the volatile/aerial state, hence its peculiar smell. It is a substance that contains a large amount of heat and light energy. In the context of the physical earthly world, light and heat are cosmic in nature: starlight and heat from the sun radiate from the surrounding cosmos to the earth. Hence, the relationship of a substance to light and heat (its “imponderable” qualities) tells us about its internal relationship to the cosmos: “Every substance originates in a state of pure heat and develops its materiality through processes of condensation. When light and heat come together in the formation of terrestrial substance, as, for example, in the formation of sulphur, the ponderable substance maintains a relationship with cosmic forces and becomes a carrier of heat and light. In this way imponderables and ponderables mix and merge. These effects are subtle, variable and difficult to describe and understand, because as sentient beings they affect us deeply within ourselves, down to the spiritual and moral core of our existence”[5]. Sulphur administered as a homeopathic/anthroposophic remedy in low potencies is administered in neurasthenic constitutions and chronification of depressive and obsessive processes with lower body temperatures. Existential weakness and internal coldness.

In Anthroposophical Psychotherapy we are very aware today of the way in which a multitude of psychiatric and psychosomatic problems are reflected in the respiratory system. Especially anxiety, fear, panic disorder which causes shallow breathing, tachypnoea and choking sensation, sleep disorders, obsessive compulsive disorder, phobic disorder, agoraphobia and PTSD, which are becoming more and more frequent in today’s population.  According to data from the University of Virginia, 40 million (18.1%) of adults (aged between 18 and 54) in the United States have an anxiety disorder every year. In Spain, for example, this type of pathology affects 20% of the adult population.

From a therapeutic point of view, we also know how valuable meditation, deep relaxation and breathing techniques are, such as those promoted by the late Zen Buddhist monk, writer, poet and Vietnamese peace activist Thich Nhat Han. Those derived from anthroposophic art therapy work, therapeutic eurythmy and anthroposophic drug treatment, such as Bryophyllum, Siderite (iron), Passionflower, Valerian, Sulphur, etc.

[1]   “The bridge between the spirituality of the world and the physicality of man” Rudolf Steiner, Dornach 5/12/1920. 5th lecture.